20 March In Blog by The Upbeat Beatles

1962 Gibson J-160E acoustic/electric, sunburst finish.” width=”236″ height=”339″ class=”alignnone size-full wp-image-3524″ /> Lennon and Harrison each bought one of these “jumbo” models (price: £161) in Rushworth’s Music House in Liverpool on 10 September 1962 (shown at right with guitar/amp department manager Bob Hobbs). Mersey Beat, in the caption from its photo commemorating the event, noted the guitars were “the only ones of their type in the country — which were specially flown to England by jet from America.” This was probably hyperbole, as they’d taken two months to arrive after being special-ordered. (Additionally, these photos may have been taken a few days after the sale, for they already sport straps and smudges.) These Gibsons were used on the 11 September recordings of “Love Me Do,” but those tracks sound nearly identical to the earlier takes of those songs, which tends to confirm an earlier purchase date. Lennon’s J-160 E was used through the Please, Please Me sessions, then stolen during the ’63 Christmas show at the Finsbury Park Astoria Theatre, London. (Pity poor Malcolm Evans, who had to break the news to Lennon.) By this time, however, Lennon and Harrison had gotten their identical guitars mixed up, so it was the one registered to Harrison that disappeared. 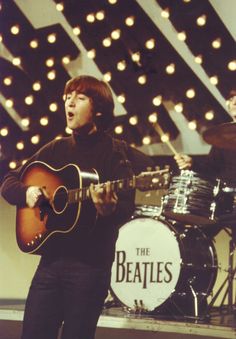