FROM MOPTOP TO ROOFTOP!

THIS IS NO ORDINARY BEATLES SHOW!

Over two hours of non-stop music – from She Loves You to I Am The Walrus and beyond – this band will have you dancing in the aisles from the very beginning.

Breath-taking harmonies, punchy musicianship and an acute attention to detail make for an uncanny resemblance to the originals – plus a touch of good old scouse humour, of course!

No other Beatles tribute band comes this close to the real thing.

Whether you are a Beatles fanatic or simply a lover of good music – DON’T MISS THEM! 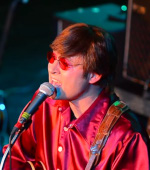 Reuven has been performing as John Lennon for ten years now. Originally an actor he has had much theatre experience in musicals such as Buddy (Playing Buddy and Ritchie Valens) and The Eva Cassidy Story. In 2012 he was chosen to star as John Lennon in Let It Be debuting at the Prince of Wales theatre in Londons West End and staying in London for 18 months. He then went on to perform with the show on Broadway in 2013 and on various tours round the UK, Japan, Canada and Singapore.
Returning to acting he starred as Reverend Shaw Moore in Footloose the musical starring Gareth Gates, and most recently as Joe Esposito in the Bill Kenwright produced This Is ELVIS in 2018.
Reuven loves performing with The Upbeat Beatles and hopes to be part of the band as it soars to new heights.

(P.S. While in Buddy he met and sang to Paul McCartney) 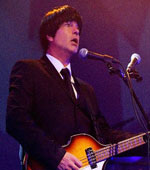 Simon has been on the stage for ten years as part of The Beatles Revolution Show, The Ultimate 60s Show and The Glory Days Rock Show – in which he played multiple roles as Sting, Freddie Mercury, David Bowie, Bono and Paul McCartney.

Is there no end to his talent?  He is now very proud to be a part of The Upbeat Beatles. 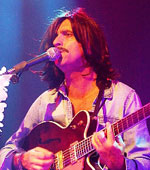 Colin Yates is a classically trained musician, having studied at The Trinity College of Music, London.

He has been performing solo and in bands since the early 80s but it is taking on the role of George Harrison that has brought him the most success.

Playing “George” has taken him around the world and in his own words….”Long may it continue!” 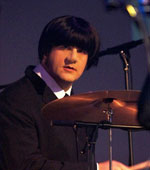 James has been a musician for 12 years, starting out at home playing cardboard boxes while his brother played guitar. When he turned pro aged just 15 he started his first Beatles tribute band, which saw them grow from the pubs and clubs of the north east to worldwide success including trips to France, Belgium, Holland, Belarus and they twice embarked on a six week tour of New Zealand.

They also performed on numerous radio shows and even made an appearance on BBC’s Blue Peter.

After the group disbanded James continued to work on the “Beatles scene” with different groups that saw him working on cruise ships around the globe and doing extensive theatre work in the UK. He also worked with other groups and artistes including Roy Orbison, Buddy Holly, Jonny Cash and Rolling Stones tributes.

Did you miss The Beatles first time around?

From Beatlemania to Psychedelia and Beyond…

It’s 1963 and a new band is taking the country by storm, playing a heady mixture of Blues, Motown and Rock ’n’ Roll…

With the songs that changed a generation, this show will have you tapping your feet from the opening bars…..dancing in the aisles…..and screaming like you did (or would have!) in ’63!

From the depths of Liverpool’s Cavern Club all the way up to that famous rooftop on The Apple Building, The Upbeat Beatles will take you on a journey that is the story of The Beatles through their songs. Let them take you on a Magical History Tour!

Since 1997 The Upbeat Beatles have been the best in the business at recreating the excitement, authentic sound and downright raw energy of the original Fab Four.

13 guitars, 5 costume changes, great powerhouse vocals and close harmonies, teamed with a driving backbeat to give you a night you’ll never forget.

The Upbeat Beatles are in constant demand and their hard earned reputation for authenticity and attention to detail has taken them around the world, playing to ecstatic audiences. These have included The Jordanian Royal Family, Hollywood film actor Michael Douglas, the Prime Minister of China and, more recently, The Lord Mayor of London who said:

“That’s the first time anyone has ever actually danced at this annual function!!!”.

The Beatles were the band that shook the world…….

``SO MUCH ENERGY AND EXCITEMENT - THEY WERE FAB!``
- Event Manager, Skibo Castle

“The Upbeat Beatles are a great tribute band, musically they are faultless, with tight, accurate harmonies and instrumentation, the boys will not disappoint you! I saw them in my home town of Bridgnorth in Shropshire and they brought the house down. NOT TO BE MISSED!!!”
- K.K. Downing - Guitarist with Judas Priest

``My family and I have seen The Upbeat Beatles a number of times now, my eldest son is a huge Beatles fan and every time we have had a really great evening. The band is fantastic and always manages to create a friendly vibe amongst the crowd. Go see them – they’re FAB!``
- Damon Hill, OBE

“It was a great night, if you go to see Love by Cirque du Soleil or Let It Be in the West End, you may see flashier sets but what you will not get is the soul of the band, these guys recreate that scally humour, as well as the fantastic material, brilliantly”
- BRFM Radio – Gwent

``It was like turning the clock back 40 years - FANTASTIC!”
- James Albright – Events Manager, Leeds Castle

“My husband and I went to our local theatre to see The Upbeat Beatles at quite short notice. As a Beatles fan, all my life, I was both looking forward to AND dreading the gig! I was wrong to worry, it was a fab night!
The guys had the Beatles patter down to a tee. I loved the banter between them about various events that took place. 'John' was as witty as the real thing and I particularly loved 'George' . The music was excellent in quality, as were their voices and harmonies - I even quite liked 'Paul', which is a first for me!!! and 'Ringo' has his mannerisms to a tee. The background video was useful as a reminder or indeed an introduction to the audience, and their costume changes were swift too. The Upbeat Beatles rocked! They invited the audience to dance and went over their time with two encores, I couldn't recommend them more. They invited anyone from the audience who wanted to meet up afterwards for a chat and a photo…………………. TOTAL PROFESSIONALS!!!”
- Liz Mutch, South Shields Gazette